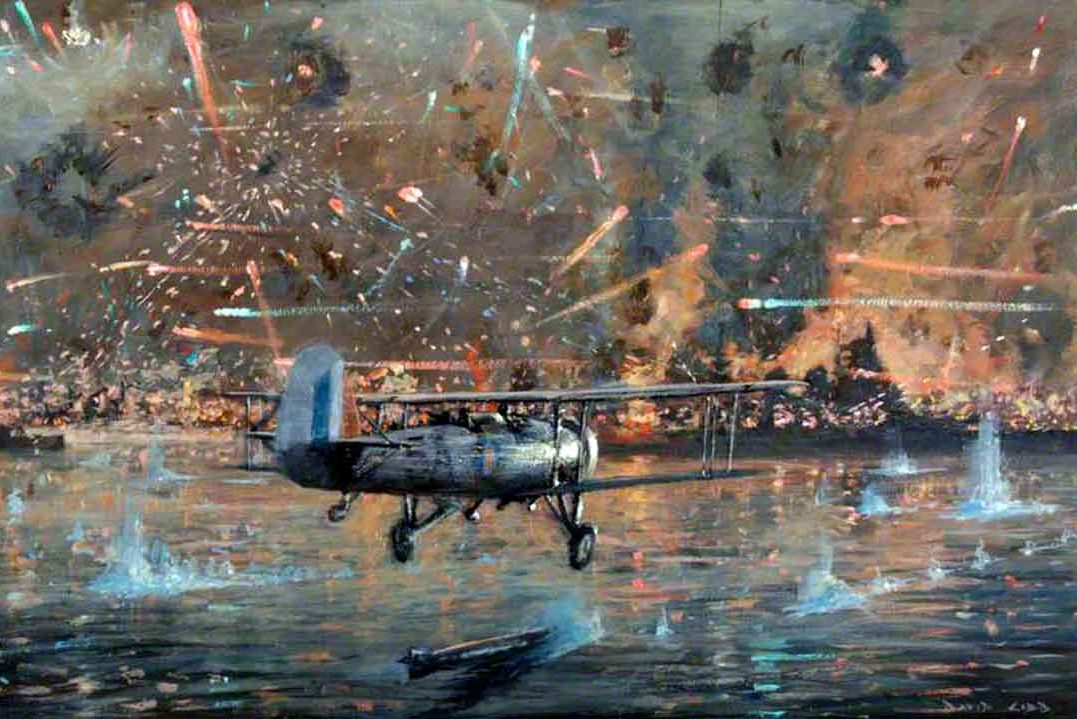 The Battle of Taranto took place because the British were keen to reduce the threat of the Italian Navy in the Mediterranean.  The Royal Navy used the novel tactic of attacking the Italian fleet at Taranto using Swordfish torpedo planes launched from aircraft carriers.

The success of the Royal Navy in this engagement, in what appears to be little more than a skirmish, was so profound that if the same damage had be wrought on the Italian fleet by the Royal Navy in a full scale naval battle, it would have been written up as a victory of Nelsonian proportions.

Such was the novel success of this British Battle that it inspired the Japanese to use the same tactics at Pearl Harbour. 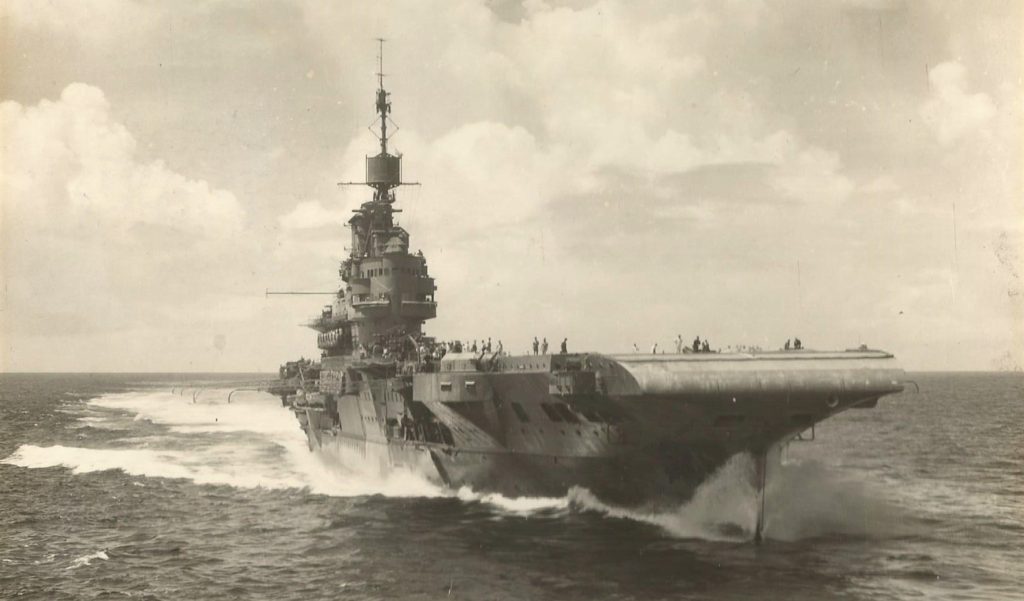 The Threat of the Italian Navy

Britain’s Royal Navy had dominated the Mediterranean since the time of Nelson. It was a vital seaway for the British for the servicing of their Empire. However by 1940 the Italian Navy had grown in size and, despite British bases in Egypt, Cyprus, Crete, Malta and Gibraltar, Britain’s naval supremacy of the region was under threat.

The Italian fleet, which was based at Taranto, was powerful. It consisted of six battleships, seven heavy cruisers, two light cruisers and eight destroyers. The Italians, though, were fearful of a major conflict with the Royal Navy because they would be unable to replace any capital ships that they might lose. However, they were prepared to make sorties against small British Naval formations.

This was a serious problem for Britain because it could not split its fleet into small squadrons without fear of one of these squadrons being attacked by a very much superior force. This limited Britain’s ability to control the Mediterranean. 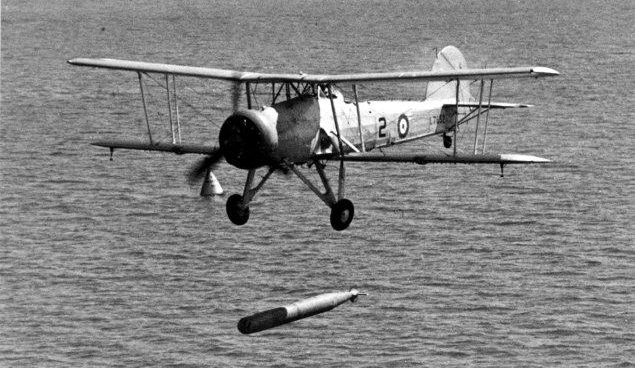 A Swordfish biplane, as used by the Royal Navy at the Battle of Taranto, dropping a torpedo

This situation had been recognised over a year before the outbreak of World War Two by Senior Royal Navy Officers who started to look at possible ways of attacking the Italian fleet at Taranto.

They were advised by the Captain of the Royal Navy aircraft carrier HMS Glorious that her obsolete and slow Fairey Swordfish biplane torpedo bombers were capable of a night attack. Indeed, the Fleet Air Arm was the only naval aviation arm with such a capability at that time. A plan was therefore developed under the name Operation  Judgement.

With the Italian’s Navy now a threat to supply routes to Crete and Malta, Admiral Andrew Cunningham decided in October 1940 to implement Operation Judgement. At his disposal were two aircraft carriers, the ageing HMS Eagle and the brand-new HMS Illustrious. He planned to fly 30 Swordfish in a night attack against the Italian fleet on 21st October 1940 which was the one hundred and thirty fifth anniversary of the Battle of Trafalgar Day.

However, some technical issues caused a delay to the plan including a breakdown in the fuel system of HMS Eagle. Even with just one aircraft carrier, Cunningham decided that the attack needed to go ahead and he loaded as many Swordfish planes as possible – twenty-one – onto HMS Illustrious. Additionally, HMS Illustrious had Fairey Fulmar fighters aboard to provide air cover for the fleet.

The British fleet in Egypt, including HMS Illustrious, sailed as if destined for Malta which was now under siege from the Italians. But on the night of 11th November, HMS Illustrious with a small escort, under cover of darkness and with total radio silence broke off from the main fleet and headed north towards Taranto.

Maintaining radio silence and without navigation lights to prevent detection, the first wave of twelve Swordfish took off just before 9pm on 11 November 1940, followed by the second wave of nine planes about 90 minutes later. They were each fitted with an auxiliary fuel tank because they were still over 170 miles from Taranto.  Their flight time to reach their target was over two hours as they travelled at a maximum speed of just 75 knots.

Half of the Swordfish were armed with torpedoes, with the other half carrying aerial bombs and flares to create diversions. The first wave of Swordfish began their approach from the south west just before midnight. The flare carriers lit up the Italian ships allowing the torpedo bombers to begin their dive into a storm of fire from over 800 anti-aircraft guns. 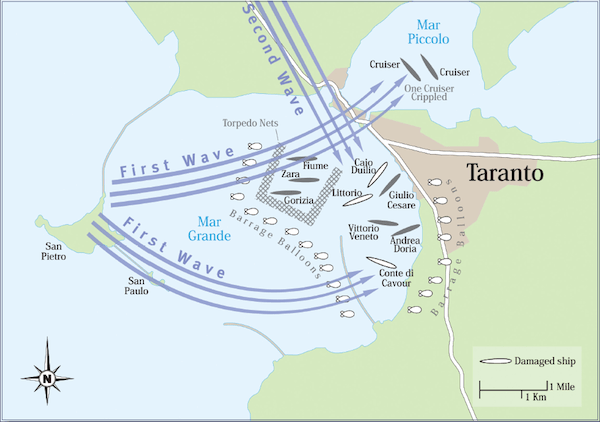 Destruction of the Italian Fleet at the Battle of Taranto

Within ten minutes the Italian fleet was suffering massive damage. Three Italian battle ships, Littorio, Caio Duilio and Conte di Cavour had been crippled, four other ships were sunk or badly damaged and a number of shore installations destroyed.

The success of the attack was a remarkable victory for such a small force. Had the same results been achieved in a traditional naval battle it would have been seen as a major victory for the Royal Navy. The Italian fleet had lost half of their capital ships in one night with over 600 men killed and wounded. British losses were two planes with two airmen killed and two taken prisoner. 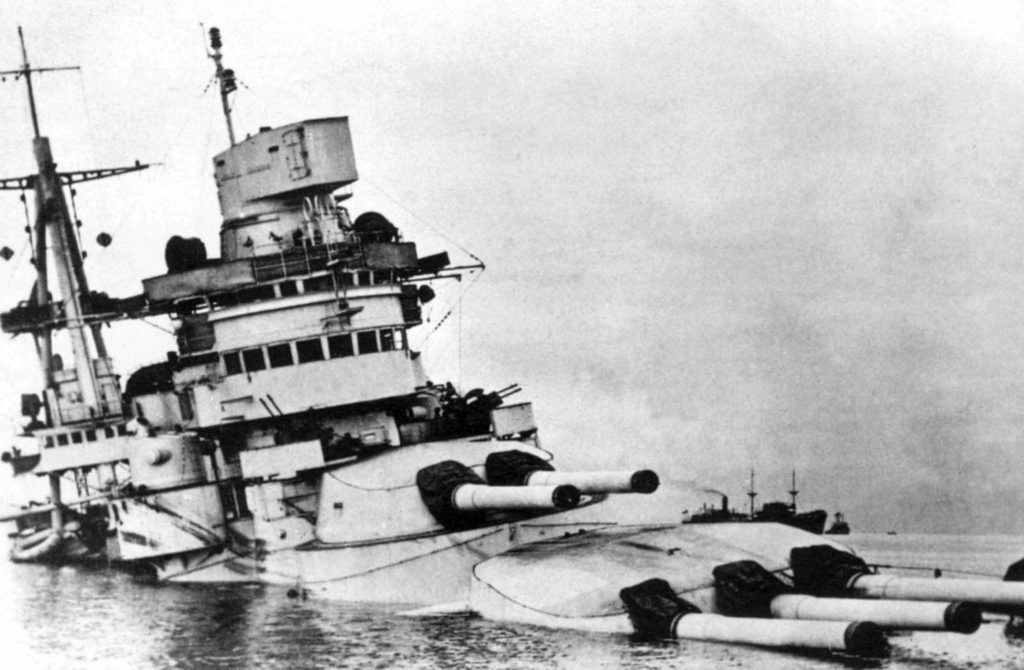 The Italian fleet never recovered from this decisive British victory at the Battle of Taranto.  Afterwards they withdrew from Taranto to Naples for greater safety and they ceased to be a major treat to the Royal Navy as they barely ventured out of port for the rest of the war.

Admiral Andrew Cunningham proclaimed, “The Battle of Taranto and the night of 11th November 1940 should be remembered forever as having shown, once and for all, that the Fleet Air Arm is the Royal Navy’s most devastating weapon.”

His remark was quite prophetic.  The nature of the attack had so impressed the Japanese that they copied the attack a year later at Pearl Harbour.  Swordfish torpedo planes were also later used against the German battleship, Bismark inflicting damage that would ultimately caused its demise.

More Battles Fought by Britain during the Second World War:

The Battles of El Alamein